Anyone experience a "worn" bowl for a Hobart 60qt?

I am experiencing an odd problem when mixing dough in my current Hobart 60qt mixer.

Based on my 20+ years of experience making dough using several other similar Hobart 60qt mixers, I find that when using my current mixer, once the “ball” of dough roughly takes shape, and then throughout the rest of the mixing process, it does not move around the bowl as it has done with all the previous units I have worked with. The dough hook seems to primarily be mixing the center of the dough mass, and the outer part of the dough mass rotates very slowly like it is experiencing some type of “drag” from the inner surface of the bowl.

With every other unit I have used, once the ball had initially balled up (-oil), and again after re-balling after oil added, the entire dough mass would freely follow closely behind the hook in its entirety, familiarly “slapping” freely around the inside of the bowl as one complete mass.

Even in the later minutes of mixing, I can see that the lower part of the dough mass moves around the bowl very slowly relative to the upper dough mass closer to the hook.

My dough recipe is solid and time tested, and has never been an issue before.

My prime suspect at the moment is the bowl when considering it’s age and condition.

The bowl is likely easily 40+ years at the least.

Besides it’s many dings and dents, the inner surface is 85% shiny on the upper part, but the closer to the bottom there are many grey non-shiny areas, as well as the bottom center having a very slight yellowish-orange tone to it, as if possibly being some type of rust or corrosion.

I am hoping to find someone who may have had a similar experience to give me some insight as to whether I am on the right track or not regarding my suspicion that my problem is likely due to the age and poor condition of the bowl.

Whats the issue with the dough?

Im asking because I buy my pizza dough, everyone I tell this to asks me why I buy pizza dough instead of making it.
Ive tried making my own dough several times,Ive never made a pizza dough I thought was as good or better than what I buy.
how you described how the dough behaves in the bowl is EXACTLY how our dough behaves, the dough hook only mixes the center of the dough. My mixer is very old and the bowl is exactly as yours.

You have me thinking this is why my dough never seemed to be great.

dough hooks are designed to go clockwise. Is it possible your running it backwards?

I was thinking the same thing. Perhaps the polarity was reversed when they wired it up. The point/end of the dough hook should be trailing through the dough as it turns. If it’s stabbing into the ball, it’s turning the wrong way.

@Steve
Retinned?
What material are these bowls?
Coating?
Thanks

Dough is never very smooth making it prone to thin spots once fully stretched to size.

Hook rotation direction is correct and hook clearance is within parameters. 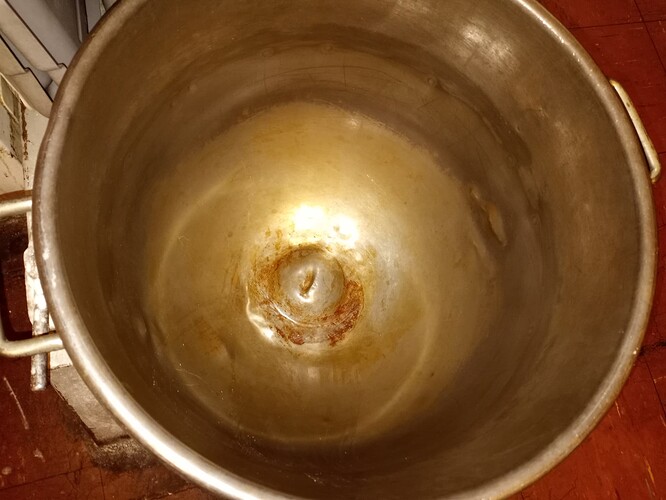 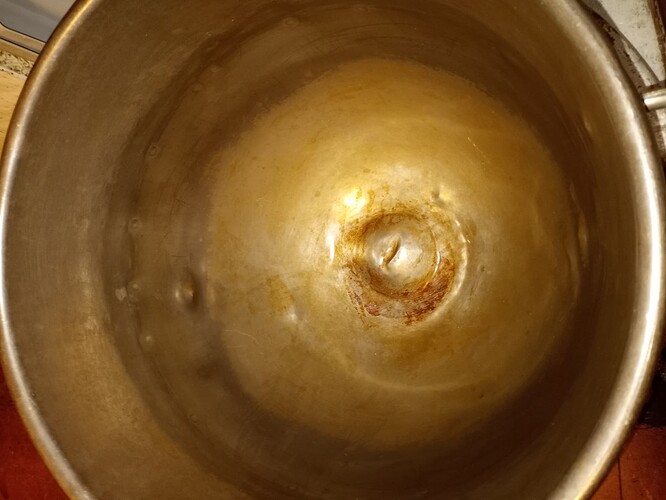 Yeah that’s what the health inspector had said when they wouldn’t allow it. We found a company in Ohio, shipped it there but never got it back, they said the acid used to clean it before retinning ate through it because it was so worn. Like I said, this thing was very old. It was a “Century” brand mixer. The mixer was great and as old as my grandparents, but the bowl went and we couldn’t find a replacement.

So the bowls are stainless with a tin coating?

I agree with everyone else. Retin the bowl.
I also have that issue, if I make a 1 batch (about 24lbs with the water) it doesn’t happen. When I make a double batch, it does. The quality of the dough is still the same on the double batch, so it doesnt concerm me.

By the time you pay shipping all over the place throw the old bowl in the trash
go to www.webstaurantstore.com and buy another or ebay

Yes, make sure its running in the proper direction.

You may also be hitting the max weight for the mixer. I discovered this last summer. My standard dough batch was right up against the maximum and during the humid summer, the flour had absorbed just enough moisture to put it over the top. The solution was to back of my hydration a bit.