I recently discovered, IMO, the best made peel out there. https://www.thebakersboard.com/ Larry the owner is a true artisan in craftsmanship and customer service. Here is my story. We own Smiling with Hope Pizza, in Reno NV, a small mom/pop model that makes NY style pizza. Growing up in NJ, 15 minutes outside NYC, in the 1950’s-80’s pizza was religion. It was also 90% cheese pies or 1 topping. Fast forward to a year ago. Opening a pizzeria in the West coast pizza culture a cheese pie is a rare bird. Multiple toppings are the norm and being in my 60’s, making every pie/prep the launching shoulder is starting to bother me. I was looking for a lighter peel and found Lillsun peels that are made from basswood which is a light weight wood. I ordered 7 of them. They came so roughly finished that I had to sand all the surfaces and within a couple weeks 1/2 of them warped, a couple starting separating at the glue joints, and were resembling a taco shell more than a pizza peel. Multiple emails to the company met with no response. The good news was they were much lighter than the pine peels we were using. The bad was I was soured on the Lillsun experience and figured I would have to stick with the pine peels.
Then I found Larry’s basswood peels and ordered 4. They are incredible in quality but they were thicker than I thought and asked if he could sand them down to 1" thickness. He said send them back, he would thin them, and return them on his dime. He sent them back within a week but they never arrived even though UPS delivered them somewhere and got a signature to boot. Larry was on it daily with them and sent out replacements before the case was resolved. Yesterday the original ones arrived in a banged up box but the peels were packed so good there was no damage to them. I emailed Larry telling him this and said to keep them. Today the replacement ones arrived via Fed Ex in perfect shape with an extra peel included.
The quality and finish on these peels are inspiring me to oil them regularly (something I have never done) as they are as much art as peel IMO. My shoulder is much happier now with these lightweight peels and I now have a great source for them. I can’t say enough about Larry. In today’s world where you are a number, get recorded messages, are directed overseas to operators that you can’t understand, he stands tall with the traits that in the past made American made a symbol of highest quality. Give these peels a try. You will not be disappointed! Walter
http://www.smilingwithhopepizza.com/ 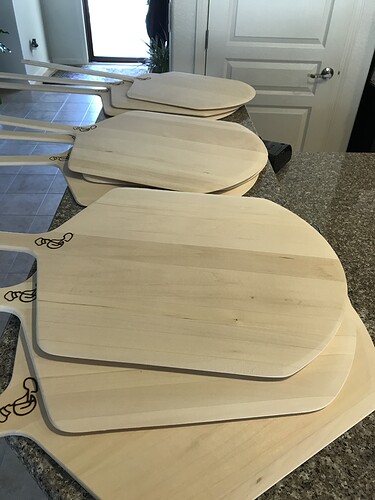 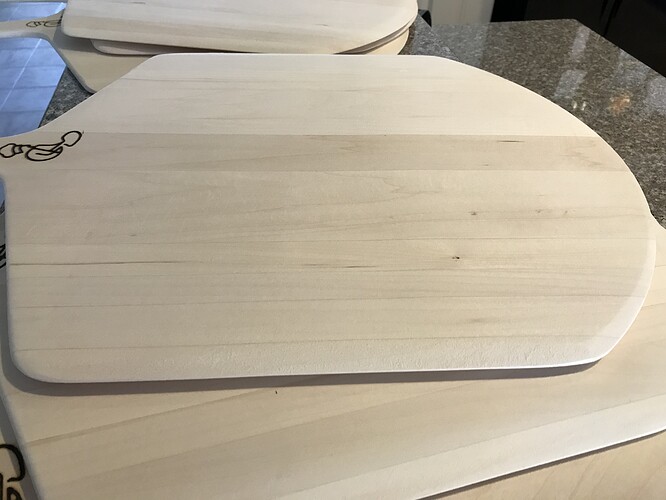