We recently opened a 2nd location and have a very old MM360 oven in there. Same one that was in there (used) when I worked at this location (different pizza shop) 20 years ago. So this oven is at least 25 years old. We have been getting a lot of inconsistencies with baking ever since we opened. First it was the timers. Both timers are between 0:45-1:00 different from the displayed time to the bake time. The prior pizza shop was cooking pizzas in like 5:00! Not possible (pan pizzas) with this oven.
Then it was the temperature. The top oven was set at 505 deg, actually read 570+ w/ a digital thermometer. The bottom was set at 515, observed 555 deg.
So we adjusted both ovens down to appx 500 deg observed temperatures and have tuned the time to that. Both ovens are cooking somewhere over 6:00 now. However it is still not right. I will get occasional burned pizzas. Sheet pizzas will cook darker on the outsides and lighter in the middle - noticeably.
And then we get to the fingers. I have not made any adjustments to the fingers yet, but the setup is nothing like our other store (same oven). Some of the top fingers in the bottom oven are even upside down and pointing up at the top oven instead of at the top of the pizzas. And the openings in the fingers do not match up to what we have in our other store.
Does anyone have any suggestions? Would replacing the thermocouples help get better temperature readings? I know that the top oven has had a lot of service in the past few years due to overheating (obviously, it was running at 575 degrees!). Will someone from Middleby come out and bring different finger covers to help us get this thing tuned in?

Reading it, my first thought was thermocouples. Certainly sounds like there are multiple issues though.

Can you post pictures of your timers and thermostats?

Here you are. Not sure how this is helpful though. The time and temp (actual) is not what these are set at. 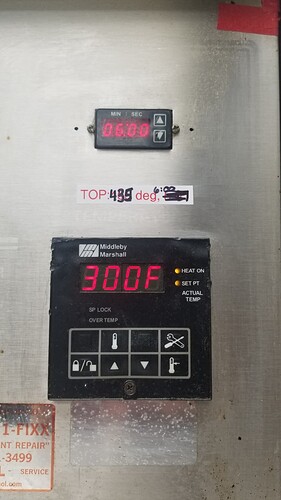 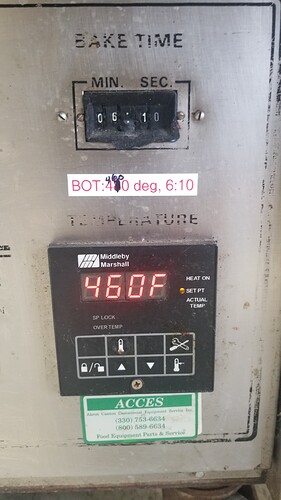 Edit: the top picture is 435 for the set point. It wasn’t changed after baking cookies

Agreed you should check the thermocouples.

I have the same rotary timer. If I don’t have the dial “clicked” just right on every number, the conveyor speed can vary widely. Fiddle with the dials and see if your track becomes more accurate.

Also, when you time it, time it both conveyor edge to edge and oven entry to exit. You might think your timer is set to one when it is set to the other.

Since this is a new place, there could be other factors that were never a problem at your prior place. In my own case, we had a problem with the make up air blowing too close to the oven. When the temperature fluctuated outside, it wreaked all kind of havoc. It took us forever to figure out. I diverted the make up air vent and it solved a lot of problems.

Last but not least, check the tension on your conveyor. Your conveyor may be getting stuck (too tight) or skipping teeth (too loose) leading to perceived problem with the timer, but its really just the belt.

You should also get a manual that shows the correct finger confuguration.

I know this is an old topic, but something happened in my own store that applies.

I too bought a store with an old oven in it. In my case it was a MM 350 (yes, you read that right). Most of the time it worked just fine, but during the winter it would act CRAZY and we spent years chasing our tail, because it was an intermittent problem.

Lo and behold, I had a new oven tech and he was tenacious in chasing this issue down. Finally, he thought to check the gas pressure and what we found was that most of the time we had sufficient gas pressure, but barely. However, when all the gas powered appliances in the store fired at the exact same moment (which happens most often on the coldest days) it brought the pressure to the oven below spec.

We called the gas company to get our pressure elevated and the difference in consistency has been tremendous. It took almost 6 weeks for them to do it, but it was worth the wait!

That is very interesting. We also have a 350, not a 360. Found that out later after I made this post.
We do not have any stoves or other ovens; so the hot water and furnace would be the only things gas. But I could look at that. Do you know if a meter needs to be installed to read the gas pressure in the oven? Any idea where it should be? The ovens are baking much better than they were when we opened, but still have room for improvement.

Before even checking the oven, check your gas meter pressure. If you have a standard residential gas meter, you likely don’t have enough pressure. Gather the BTUs from your oven(s), furnace, and water heater and call your gas company. Tell them you want to speak to a project manager about possible elevated pressure. The PM will take your BTUs and compute if you need elevated pressure, a new meter, or both.

If your meter is already upgraded to a commercial meter, buy yourself a manometer (pressure gage) on Amazon. Find the gas valve in the oven and look for a place to connect it. Your oven being as old as mine, you probably have an aftermarket valve. You’ll need to look it up online or talk to your oven tech to know where to connect it.

The 350 is rated for 6 water inch columns to 14. I was at 6.25 most of the time, but when running both decks, the furnace, and the water heater simultaneously, I dropped to the high 4s.

Awesome! Thank you for all the help here. Will try this out!